The cryptocurrency market is always producing gems that give investors unbelievable gains every other week and getting in at the right time can be life-changing. In the past week, it was those who bet on Loopring that saw the highest gains. The relatively smaller known altcoin shot up ninefold in just over two weeks as rumors and retail hype pushed it to new highs.

At press time, Loopring (LRC) is trading at $3.13, up by 10 percent in the past day. Its trading volume stood at $1.6 billion, showing investors have been taking notice. This volume was higher than other market titans like Polkadot, EOS, Chainlink, Bitcoin Cash and even the supreme meme coin DOGE. 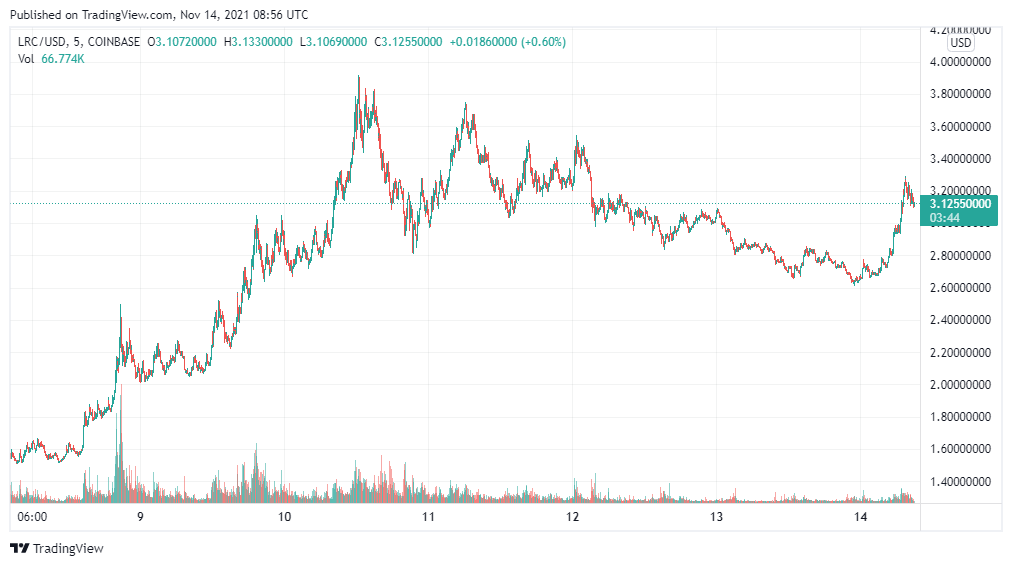 In the past 7 days, the altcoin has gained 132 percent, the highest in the top 100 cryptocurrencies in the market.

What’s even more impressive is that as recently as October 28, LRC was trading for as low as $0.37. At the time, its trading volume was averaging less than $100 million, typical of small altcoins. It then went on a run in two weeks that saw it hit $3.72, a new all-time high. This was a 900 percent rise, the highest in the market at the time.

At some point, its volume went as high as $9.3 billion. In today’s market, that would be the fourth-highest after Tether, BTC and Ether.

What’s Loopring and why has it shot up 9x?

Loopring is a blockchain project built on the Ethereum network that targets high-throughput, low-cost trading and payments on Ethereum. It’s a Layer 2 project that gives the security of Ethereum without the high fees and slow transaction speed. It aims to build an interconnected system of trading platforms where buyers and sellers can access multiple trading platforms from one central protocol and match orders cross-platform.

Loopring utilizes zero-knowledge rollups (zkRollup), a new type of cryptography that allows for verification of any data without to actually having to reveal this data. For instance, it could allow a platform to verify your wallet balance or email address without revealing them to the other party. In addition, it bundles transactions together and executes them offline in a provably correct manner, further accelerating the transaction speed.

While its tech is top-notch, this is rarely a reason for a cryptocurrency project to shoot up in a short time. Most of Loopring’s gains came from links to GameStop, the electronics and video game retailer whose stock was almost shorted into oblivion by Wall Street before Redditors revolted and staged the greatest upset to big-money investors of all time.

GameStop revealed it was looking to get into NFTs, continuing its good relationship with the cryptocurrency industry. Shortly after, it was discovered that Loopring’s GitHub profile contained data that linked to GameStop. The rumors started circling immediately that GameStop would build its NFT platform on Loopring, and the price took off.

Anytime a mainstream public-listed company, in this case, GameStop, wants to do something metaverse-related, the market responds positively. It’s a hot buzzword, with Microsoft, Nike, Alibaba and Facebook all announcing some metaverse-related direction in their products.

While it has yet to confirm the rumors, GameStop fueled the rumors by publishing a job posting recently for ‘Head of Web3 Gaming.’ The applicant’s responsibilities will include “staying abreast of all new NFT/crypto projects and global gaming brands” as well as “leading integrations with different blockchains and Ethereum Layer 2 environments.” Loopring is a Layer 2 project on Ethereum.

“It goes beyond GameStop”

Dragos Dunica, the co-founder of DappRadar, believes it goes beyond GameStop rumors. While these rumors were a spark, they were not enough to bring the rally that Loopring has seen. In addition, such a rumor would only have sparked the rise for one day or two, especially since they are not even confirmed by either Loopring or GameStop.

For Dunica, the retail investors took up the rumor and once they saw LRC flash green, they piled in. After all, we’re in one of the industry’s greatest bull runs and any project that seems to be gaining is seeing loads of money coming in. Retail investors have especially been critical in pushing the prices of smaller-cap cryptocurrencies.

Dunica believes that retail investors are piling in as they believe LRC could be the next token that sees incredible 50x or even 100x gains. Since its price was below $0.5 just two weeks ago, retail investors saw an opportunity to get into a gem before it exploded.

The sizable and consistent leaps over the last two weeks have brought LRC onto the radar of traders looking for the next scalp. […] GameStop has a powerful voice on Reddit, where these sorts of rumors tend to start. It’s not surprising to see investors getting excited.