A Decentralized Autonomous Organization (DAO) under the name of ConstitutionDAO has raised $3,7 (ETH 820.134) million from a community that intends to buy a rare first printing of the U.S. Constitution during a Sotheby’s high-profile auction meant to happen on November 18th.

ConstitutionDAO is currently pooling millions of dollars, aiming to hit $20 million, hoping to “The Constitution in the hands of The People.”

The project was announced through Twitter on November 12th and launched the day after. They raised $800k in the span of an hour and then hit the first $3M overnight on the 14th.

The Constitution’s printing the hope to buy was the private collector Howard Goldman’s crown jewel, bought at Sotherby’s in 1988 for $165,000. Sotheby’s now set the estimated value at $15 million to $20 million.

Sotheby’s called this first printing rarer than the first edition of the 1776 Declaration of Independence and “one of the most rare and coveted historical documents that has ever come to auction,” Reuters reported.

It is a six-page document that is not signed but lists the Constitutional Convention delegates who adopted it in 1787 and adds a letter of submission by George Washington. The Bill of Rights is not included in the printing because it was added a few years later.

What Could Happen To The Document

Currently, anyone can contribute to the bid, as the main idea of the group is that “historic artifacts are meant to be shared and enjoyed”, not owned by private parties.

For this reason, ConstitutionDAO shared the possibility of displaying the copy at the Smithsonian and is in contact with them, as well as with the NY Public Library and The National Monuments Foundation, to understand the best path to follow for the document’s preservation if they manage to win the auction.

We believe that The US Constitution is a shared good and should be shared and displayed in public spaces — by the people whose governance and freedom it was created to protect.

To showcase experience, the group explained that SyndicateDAO is supporting the project and a member is coordinating it.

Furthermore, crypto exchange FTX is interested in supporting the project and offered to exchange the raised ETH for dollars in order to facilitate the purchase.

Governance And Ownership Of The Constitution

The contributors will own “a piece” of the Constitution based on the amount of money they gave. They will also have equal right to vote on future developments, “such as minting a digital equivalent, display, and other purchases”.

The group is currently using the name $PEOPLE for the project’s token. Graham Novak, one of the project’s architects, shared on Discord:

The ownership, of course, will reside within the DAO. We’ll fractionalize, NFT-ify, and mem-ify in the way that we do,”

ConstitutionDAO has a group of contributors who are aggressively working on the needs and details of the project, and some aspects are still being discussed. As they are still building the DAO’s structure, they “want to stay true to the decentralized and democratic nature of DAOs.”

Post-purchase costs are dependent on the terms of a partnership with a museum so it’s very hard to estimate right now. Will have a better sense over the next week 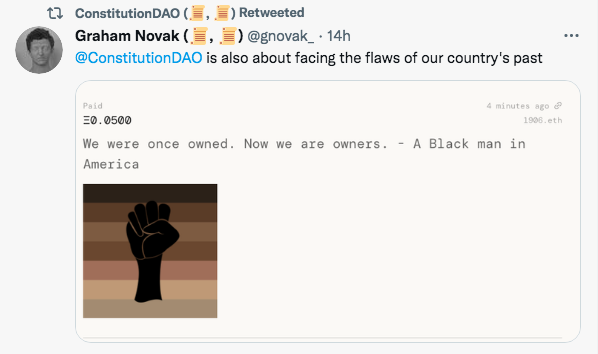 Web3 As The Future Of Democracy

Web3 is the evolution of the web, stepping up from centralized (like social media) to decentralized. Through Web3’s native payments layer, tokens can be used to make anonymous transactions using crypto-wallets. Tokens give their holders the power of voting, holding ownership, and selling them.

ConstitutionDAO aims to use the self-governance that web3 offers so everyone involved can take “future decisions around destination” and preservation.

Decentralization and cryptocurrency (web3) have created structures that allow people to self-govern with unparalleled levels of autonomy and freedom. It’s fitting that we use this technology to honor and protect the greatest historical tool for human governance: the U.S. Constitution.

The still young ConstitionDAO has future plans for building “open-source tools to help any other crowd-funding DAO and help the DAO ecosystem in general”.