Crypto.com’s record-breaking deal to get the naming rights to the iconic Staples Center in Los Angeles has arguably been the biggest news of the week in the cryptocurrency sector. And while it raised eyebrows, it seems the deal is already paying off for the Singaporean exchange. Its token shot up 30 percent and, together wth Coinbase and FTX, has shot up in trading volume as sports deals seem to be bringing in new users.

Crypto.com struck a deal with AEG, the owner of the Staples Center this week, to rename the venue to the Crypto.com Arena. As CNF reported, this was the biggest naming rights deal in the history of U.S sports.

Staples Center is home to the LA Lakers, a leading NBA franchise, as well as the LA Clippers, the WNBA’s LA Sparks and NHL’s LA Kings.

And it would seem that the $700 million deal is already paying dividends.

Crypto.com’s native token CRO shot up after the announcement to set a new all-time high at $0.598. According to CryptoRank, CRO is the latest cryptocurrency to hit its ATH. The token is trading at $0.554 at press time but is still up 15 percent in the past day. 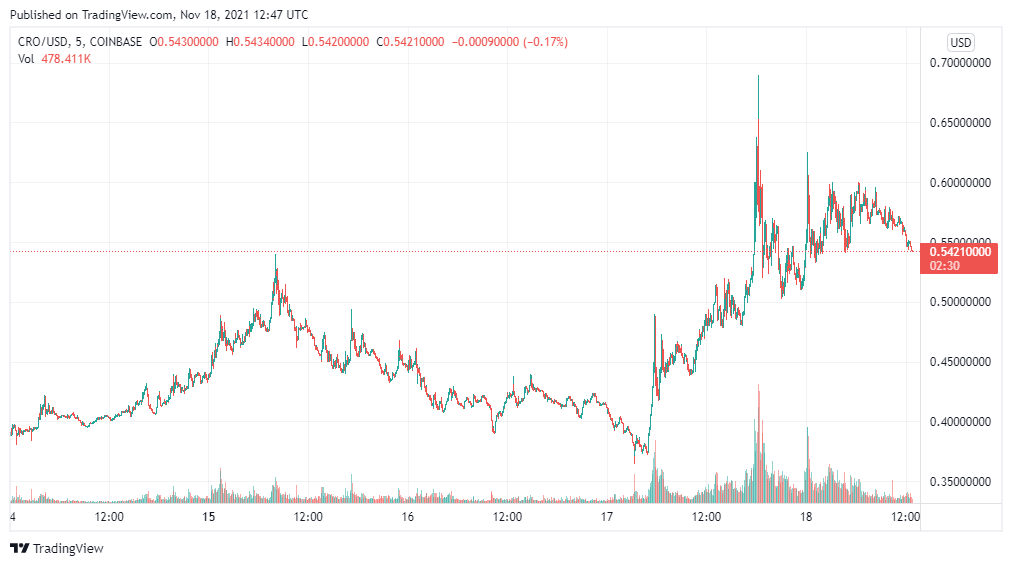 The volume has also shot up as the eyes of the world turned towards the token whose name will be associated with the most famous NBA team for the next two decades. It shot up to over $2 billion, a 1,000 percent rise from just a few days ago when it was below $200 million.

With an overall market cap of $14 billion, Crypto.com is now the 16th largest token in the market, a spot ahead of DeFi king Uniswap and oracle network Chainlink.

It’s not just with its token price that Crypto.com is seeing massive gains. Its main business, the exchange, has recorded a surge in volume since announcing the partnership, according to data from CoinGecko.

Binance is still the world’s most dominant exchange. At some point in the past few days, its dominance over its three major rivals – FTX, Coinbase and Crypto.com – was as high as 58 percent. But in the past 24 hours, this dominance is down to 45 percent.

FTX, Coinbase and Crypto.com are not the world’s largest exchanges after Binance. However, they are considered its main rivals as they rank very highly on all the other metrics aside from volume, including cybersecurity and web traffic.