Have you been Googling about Dogecoin nonstop this year, from news making headlines to price movements to celebrity links? Well, you’re not alone. A new study shows that Dogecoin was the most popular cryptocurrency for U.S residents, emerging first in twice as many states as Bitcoin. Another meme coin, Shiba Inu, was fourth as the new generation of tokens seems to be getting traction at the expense of the veterans.

Dogecoin has had one hell of a year. It has been on the headlines every other day, whether it’s for price surges or because the world’s richest man is talking about integrating it into his electric car company’s payment systems. Celebrities have jumped on its hype, from rappers Snoop Dogg, Lil’ Yachty and Soulja Boy to YouTuber Jake Paul to Shark Tank star and billionaire investor Mark Cuban.

It, therefore, comes as little surprise that DOGE was the most searched cryptocurrency in the U.S. According to a study done by The Advisor Coach, Dogecoin topped the searches in 23 of the 50 U.S states, an impressive statistic for a cryptocurrency that was only meant to be a joke and to poke fun at people who were too serious about Bitcoin years ago.

Bitcoin came in at a distant second with just 10 states, less than half the number by Dogecoin. Ethereum with 8 states was third, with yet another meme coin, Shiba Inu, trailing closely at 7. Cardano and Lithium both picked up one state each. 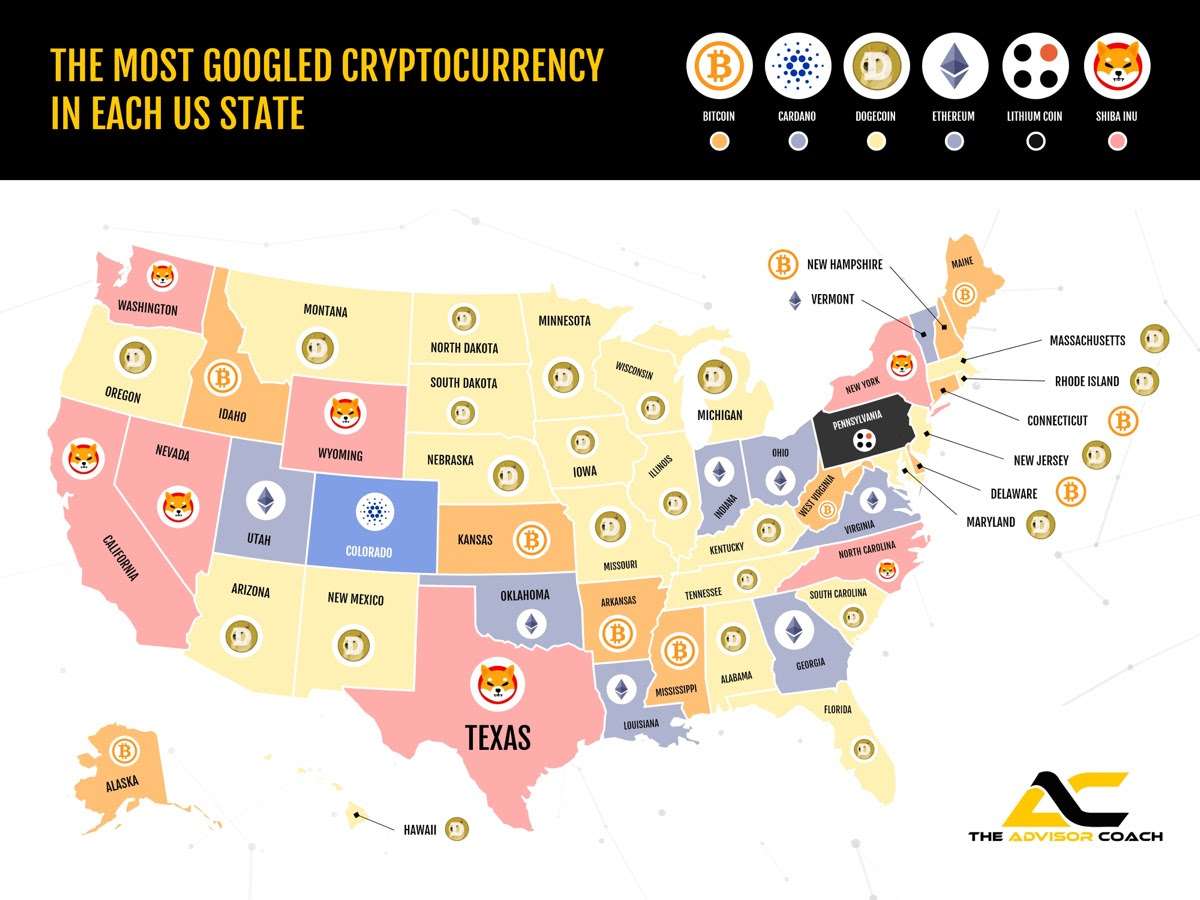 Doge’s popularity spread across the U.S, as the chart above shows. It was the most popular cryptocurrency in Massachusetts, New Jersey, Illinois, Wisconsin, North and South Dakota and Arizona.

Bitcoin topped the charts in Connecticut, Alaska, Mississippi and New Hampshire. Ethereum was most popular in states such as Georgia, Louisiana, Ohio and Virginia.

Cardano picked up the top spot in one state, which (not by coincidence) is where Charles Hoskinson resides – that’s “always warm, always sunny, sometimes Colorado,” as the Cardano founder always describes it.

The most surprising name on the chart was Lithium, which was the top coin in Pennsylvania. Lithium is trading at $0.02867 at press time with a $20 million market cap, making its appearance on the list ahead of titans like Binance Coin, XRP, Litecoin and Solana all the more curious.

Shiba Inu was most popular in some of the most important states in the U.S, including Texas, California and the financial capital of the world, New York.