The nascent Polkadot ecosystem probably offers the biggest upside in terms of growth in the crypto space. With its slot auctions recently inaugurated, investors are in search of the next big project with the best risk/reward to maximize their DOT staking bonuses.

However, many projects, such as Astar Network, Bifrost, Manta Network, and others have launched their Crowdloan strategies to attract investors, but their offering has limitations, high requirements, or complexities that could discourage users to stake their DOT.

In that sense, decentralized identity aggregation protocol Litentry has set out to take the Polkadot ecosystem and its auction by storm. As the network inaugurated the auctions that will determine the projects to occupy the yearned Polkadot slots, the project launched an innovative Crowdloan strategy to gather support from the DOT community.

To be connected with Polkadot via the relay chain to obtain the most benefit on the network, Litentry will incentivize investors to obtain an advantage in the auctions and win a slot to deploy a parachain. The program and its success will complete yet another milestone in their roadmap to becoming the standard in DIDs.

Litentry will participate in the auctions from the get-go and has allocated 20% of its native token supply, LIT, to create strong incentives for investors to lock their DOT holdings into its Crowdloan campaign. In total, the program’s Crowdloan pool will have a hard cap of around 8,000,000 DOT.

This already gives Litentry a massive advantage over its competitors and will ensure that none of the rewards distributed to its supporters get diluted post-staking. The campaign will be live until December 17, 2021, or until the project secures a slot on Polkadot, whichever is earlier.

Litentry Network Offers Investors An Opportunity To Maximize Their Profits 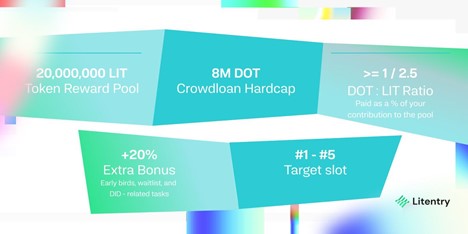 In order to participate in the program, investors will need to lock a minimum of 5 DOT. For every DOT contributed, participants will be rewarded with at least 2.5 LIT. Later, once the program manages to secure a slot, the rewards will be calculated based on the amount contributed and the total DOT contributions multiplied by 20 million LIT.

Another distinctive feature of Litentry’s program is that investors will receive their rewards linearly in each block. This process will begin when the Litentry parachain is deployed on the Polkadot relay chain until the slot expires 96 weeks later.

Early supporters will have a chance to win an additional 10% in rewards if they stake DOT before November 18. Doing so before November 25 earns a 5% reward bonus. On top of that, users can take on identity tasks related to the project’s DID use case and win another 10% bonus.

Via these collaborations, Litentry Network has opened more opportunities for users with a chance to win extra rewards. For example, Binance offers a warmup promotion where they give users an extra pool of 500,000 LIT plus liquidity BDOT. There is also a partnership with Polkadot-based DAO infrastructure, SubDAO, where users can get a share of up to 10,000 GOV tokens via an airdrop. Finally, a partnership with Polkadot Name System can earn any user who contributes more than 10 DOT a free .dot domain name.

The DeFi platform will provide lending options to expand access for the users. In that way, investors can still meet the minimum DOT stake requirements and contribute to the program from both platforms. This will give them another chance to win rewards in LIT and liquidity DOT derivatives.

Taking into consideration that Polkadot and blockchains with interoperable capabilities are becoming a hot trend in the crypto space, the fact that there is low variation in DOT staking rewards, and the upside potential for early projects capable of securing a parachain slot, Litentry Network provides investors with a perfect opportunity to expand their portfolio and bet on a project with a solid use case.