Recently Colony has raised over one million dollars in seed funding led by GBV Capital, Foresight Ventures, and the Avalanche Foundation. What is the Colony project?

Colony announced it has successfully raised over $1 million in seed funding led by GBV Capital, Foresight Ventures, and the Avalanche Foundation.

Colony is a new Ecosystem Farming project engaged with the community. It has already begun allocating capital to early-stage projects built on Avalanche and assisting in their efficient development. When Colony’s Application goes live, the community will benefit from these early-stage investments via an Airdrop Mechanism. This is a world first and provides an excellent incentive for token holders who diversify their portfolios on the Avalanche ecosystem by staking their Colony token. Additional announcements will be made in November.

Let’s see what Colony is. 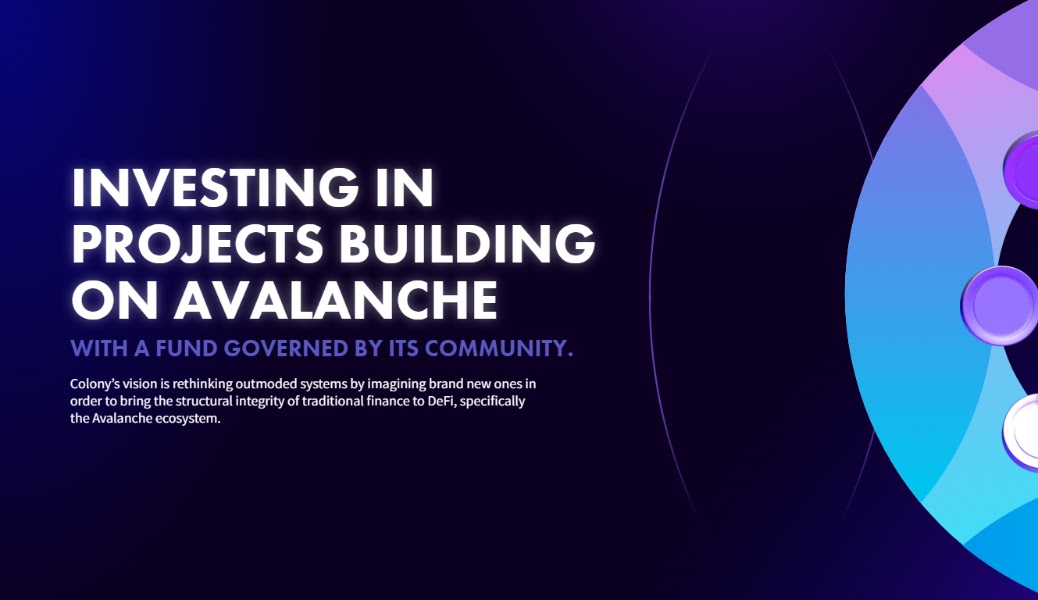 Colony is a community-driven accelerator that will evolve into a decentralized autonomous organization (DAO) to accelerate the expansion of the Avalanche ecosystem. $CLY is the governance token that powers it.

Colony will deploy funds within Avalanche in early-stage initiatives, offer liquidity to DeFi protocols, maintain an Index of the most promising Avalanche projects, and validate networks via stacking capabilities.

The open governance model ensures that capital is allocated solely for the benefit of the Avalanche ecosystem. Colony returns value earned by its assets to the Community via airdrops, a buyback option, and staking rewards.

Colony aims to lay a properly incentivized foundation for the next generation of Avalanche-based applications. Colony infuses traditional venture funding with a sense of community via open governance, support, and inclusion. Colony will gradually implement a DAO structure to decentralize.

Along with bringing promising projects to life, Colony will contribute to the Avalanche protocols by providing funding to increase liquidity and secure networks through nodes’ operation. Additionally to these features, Colony will maintain an Index of Avalanche-based projects.

Colony’s vision is to rethink outdated systems to bring the structural integrity of traditional finance to DeFi, more precisely, the Avalanche ecosystem.

Stake and earn from Avax and upcoming subnets

Earned $CLY that has been repurchased by Colony due to profits generated by the Liquidity Provider Program on the Avalanche ecosystem.

Receive airdrops from Colony’s investments in the most promising Avalanche-based projects.

10% of Colony’s capital will be deployed in AVAX that will be staked. Colony will also contribute to subnets validation if allowed.

10% of the capital will be deployed in the top 10 projects built on Avalanche ranked by market capitalization, rebalanced quarterly. The community will be able to vote for projects to join/leave the Index.

50% of Colony’s capital will be deployed to support the best teams and projects building on Avalanche, finance their growth and help them to develop efficiently.

Colony’s Private Sale was open to our early community members, and they were overjoyed to see the tremendous enthusiasm and support for the project.

30% of Colony’s capital will be deployed in providing liquidity to protocols built on Avalanche, thus participating actively in the Avalanche ecosystem.

$CLY community will be able to change capital deployment principles

Colony will release its Application features and grow its community worldwide. Colony will be closing its private and public sales in Q4.

Colony will start empowering selected projects building on Avalanche with first capital deployment according to the strategy.

Colony will evolve towards a DAO model with its own subnet on Avalanche, building new incentive models for Colony Token holders.

Using its subnet, the DAO will launch the development of its 3 pillars to sustain the long-term growth of Avalanche:

The Colony tokenomics will be strengthened with direct rewards linked to the ecosystem activity and the embedded burning mechanism.

Strategically, establishing strong links with the Avalanche Foundation was critical. Colony will share deal flow with the organization to develop a more fertile ground for Avalanche-based projects that involve the community in their development. Thus, projects will benefit from an initial community from the start.

Along with funding, additional critical pillars influence a project’s success: marketing, technical expertise, community, momentum, and network. In collaboration with the Avalanche Foundation and other ecosystem stakeholders, Colony will enable projects built on Avalanche to reach their full potential.

November marketing campaigns will continue, with a wide range of AMAs already scheduled. Numerous details about the private sale investors, partnerships, and future developments will be made public.

Regarding the Public Sale IDO/IEO, additional announcements will be made throughout November, so be sure to follow them on social media to ensure you don’t miss out.