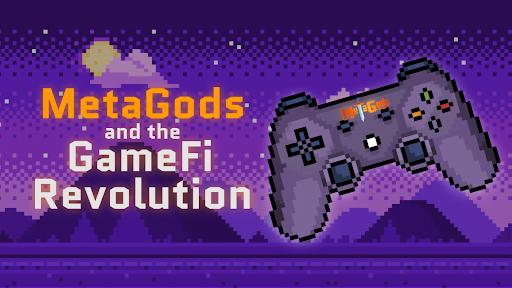 There are a lot of blockchain-based games coming out, as the merger between the game industry and decentralized networks accelerates. Most of the games we have seen so far have not integrated blockchain technology deeply into the game’s mechanics. In most cases, it seems like an afterthought tagged at the end of development.

MetaGods is a new blockchain-based game that’s been thinking carefully about how to implement blockchain mechanics into its economy. The successful combination of thorough game design, rewarding gameplay experience, and tokenomics is the key to this new genre of games.

The word GameFi is a combination of “Game” and “Finance.” It describes the gamification of financial systems combined with the introduction of blockchain, tokenomics, and the play-to-earn model.

GameFi video game projects run on a blockchain network, which grants players the ability to verify the ownership of the virtual items in the game. In contrast to traditional gaming, where users play to win, GameFi projects aim to not only entertain, but also deliver monetary value.

The first instances of the GameFi concept include early Minecraft servers integrated with Bitcoin; the introduction of smart contracts accelerated this trend. Today, there are several projects that natively build on top of a blockchain.

Yet, blockchain design and game development are different skills. Many of the early GameFi projects have been unable to create an enjoyable playing experience and combine it with tokens and other blockchain technology.

The result has been GameFi platforms that are quickly abandoned by players. Once the excitement dies down, and the speculators have sold off the tokens, the games slowly die. It’s difficult to find a GameFi project that implements blockchain well while creating an engaging game at the core.

In the context of many projects that are just ‘vaporware’ with no meaningful development and teams that just want to make quick money and run away… MetaGods is developing an appealing and engaging game universe that incorporates blockchain technology at its core.

In MetaGods, all playable characters are backed by an NFT. This way, every character minted in the game can be traded over the blockchain with other players, or crypto investors. That is also true for the in-game items players receive for completing events, doing raids, or winning tournaments.

The game also takes advantage of the uniqueness of NFTs to create verifiable permadeath. There are certain areas in the game that give the rarest most powerful loot, but they have a twist. Playable characters that enter these areas can die and be lost forever. Since every character is represented by an NFT, once the character loses all of its health, the player can never enter the game mode ever again.

The game also uses a dual token system. These are the $MGOD and $RELIC tokens each supporting a different part of the in-game economy. The first one, $MGOD, is used to participate in game events and tournaments, as well as purchasing special edition adventure packs. The $RELIC token is used to buy in-game items for the internal economy of the game.

All of these blockchain mechanics are at the core of the first action RPG in the GameFi industry. Action RPGs have always been known for being challenging games, and the blockchain systems of MetaGod were designed to complement the genre.

MetaGods is a project where the game and blockchain mechanics have been created in unison. Each serves to reinforce the other and create an experience that blends together. The team has put a lot of effort into the platform, and plans to support it long term. There are even more exciting features yet to be announced, and this is only the beginning of an amazing journey the project will embark on in the near future.

The project has released a roadmap that covers the tail end of 2021, and also next year:

MetaGods has other surprises prepared, and more things will come in the future. Stay tuned to MetaGods’ updates and developments through their official social media channels below.

MetaGods is a play-to-earn game where players battle alongside each other in a quest to attain godhood. Each god is represented by a set of stats backed by an NFT where gods can be created with the union of gods with mortals, and gods with other gods.

The game works with a dual token system. The $MGOD and $RELIC are the two tokens of the platform. $MGOD is used as the governance token of the project and can be used to enter special events. $RELIC is an earnable in-game currency that supports the play-to-earn structure of MetaGods.