Bitcoin is trading above $50,000 and has been doing so since early October. The targets for most of its holders are high, with some even holding on to a belief that it will hit $100,000 before the year ends. However, just four years ago, Bitcoin was just venturing into five figures. On November 29 in 2017, BTC hit $10,000 for the very first time, and although it has seen some drops below that level, it’s been mostly trading above this level.

2017 was the year in which Bitcoin drew the attention of mainstream investors and mainstream media. The cryptocurrency started the year off just below $1,000 and it took quite a while before it took off. It took five months to hit $2,000, and then a further three months to hit $3,000. The gains kept coming as more investors began to notice the potential in the cryptocurrency.

And then, on November 29, it finally happened. Bitcoin hit five figures for the first time ever.

The gains would keep coming as the holiday season kicked in and in mid-December, the cryptocurrency hit a new all-time high just shy of $20,000.

This rise in its price consistently in 2017 saw more investors pile in, and with it, the trading volume continued to shoot up. In the first four months of the year, the trading volume never went past $500 million. However, by the time it was setting a new record in December, its volume was averaging above $15 billion.

Where does Bitcoin end the year?

Four years ago at a time like this, Bitcoin hit a new milestone and this sparked a rally to a new all-time high. And while many will be hoping BTC can reprise this run, there is a lot that has changed since then.

Bitcoin is now a mainstream investment asset, with even the biggest banks and investment firms creating room in their portfolios for the cryptocurrency. There’s much more liquidity, regulators have stepped up their game, and corporations have a much bigger say now, with the likes of Elon Musk and Michael Saylor leading this corporate infiltration.

And of course, there are the altcoins that collectively, now rival Bitcoin for dominance. When Bitcoin hit a new record in December 2017, its dominance was over 60 percent. Currently, its dominance is at 42.1 percent.

At press time, Bitcoin is trading at $57,360, up by 5.55 percent in the past day in an overall market recovery to start the week. Its market cap is still below $1.1 trillion.

And while it’s still $11,000 below its all-time high, this is the least severe drawback from an all-time high this year. Glassnode data shows that the most severe was between May and July which was as high as 54 percent. Currently, the drawback is at 16.5 percent.

#Bitcoin has traded down -21.8% off the ATH during this months correction.

It may be a surprise that this correction is actually the least severe in 2021, measured in terms of drawdown from ATH.

For now, the support seems strong at $50,000 according to analyst Material Scientist. According to him, there’s a massive buy wall that should keep the prices above that level, the largest buy wall “since the $30,000 bottom.” 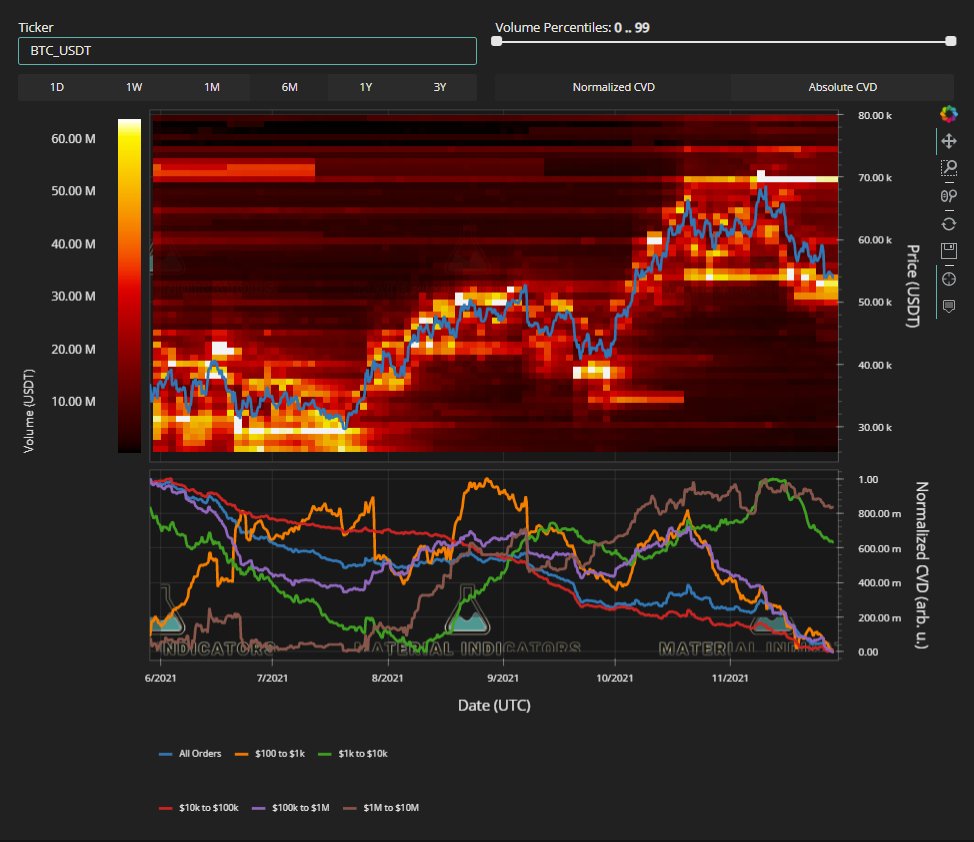 On the flip side, this giant actor has also placed resistance at $70,000.

“Essentially, 1 actor has the entire market in their grip,” Material Scientist believes.

For Joe DiPasquale, the CEO of BitBull Capital, a cryptocurrency hedge fund manager, the support is at $53,000. Each time BTC has tested this level, “it bounced higher, signaling strong support there,” he told Forbes.

This signals that we have strong purchasing interest at that level. When repeated support this happens, it is evidence of demand at that level and a bullish signal that the asset will appreciate from there.

For now, the most important factor for Bitcoin will be how it reacts to renewed uncertainty brought about by the new variant of the COVID-19 virus. As CNF reported, this variant has most markets struggling, from stocks to indexes to commodities.

For now, it may be too early to predict what effect the new variant will have long-term, Priya Misra, an executive at TD Securities told Bloomberg.

“We really need some more answers to figure out the impact on growth,” she stated.

Bitcoin holders remain confident that we will end the year above $60,000, despite trading below this level for almost two weeks now.

Where will #Bitcoin end November 2021?