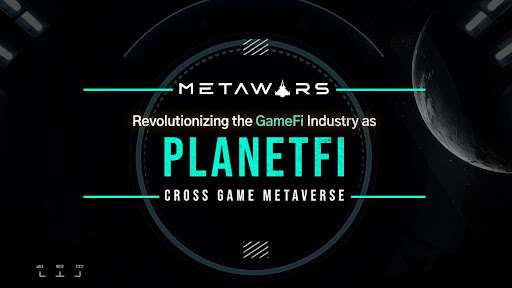 MetaWars is leaving the ordinary and entering the extraordinary with a game-changing new venture – the next generation stake-to-earn platform: PlanetFi.

For the first time, the PlanetFi enables gamers to transfer their in-game NFT assets between game worlds, as well as mine different tradable currencies and tokens from partnered games, adding a whole new layer to the play-to-earn economy.

This ground-breaking development makes MetaWars the first gaming project that connects different metaverses together, creating a true multiverse. It places the project in a leading position in the GameFi sector.

PlanetFi creates a new and expanded exciting gateway for mainstream users to enter the blockchain gaming economy and opens the door of opportunity for creative developers to be innovative and genuinely take the industry to the next level.

The MetaWars Story So Far

MetaWars launched on PancakeSwap on October 27th after a successful triple ICO, while various NFT presale auctions and events have already been hosted on the project’s slick and smooth Dapp.

MetaWars will provide a platform for early-stage projects and exclusive benefits to investors to further evolve the metaverse ecosystem.

MetaWars is Evolving the Next Generation platform

MetaWars team is bringing the cross-game NFT stake-to-earn mechanics to the market through the Planet NFT Sale and already has its first highly anticipated project lined up for launch – MetaGods.

MetaGods is a revolutionary play-to-earn 8-bit action RPG set within Greek mythology introducing permadeath supported by AI technology. “MetaGods is excited to launch on Metawars. We believe the community is extremely strong, and by combining forces… we can conquer the metaverse. The in-game economies will be massive! What’s better than becoming a god of a planet?” — Jack, the Co-founder of MetaGods

PlanetFi will provide MetaGods with community support, marketing promotion, and strategic advice. Early stake to earn for the token will soon begin on the MetaWars platform.

MetaWars is also in the process of securing other exciting potential GameFi projects to PlanetFi, including:

The possibilities for MetaWars, the first cross-game metaverse platform, is one of a kind in the current market, looking forward to their further developments and the product release.

MetaWars is a futuristic space odyssey built on an expansive play-to-earn model and GameFi ecosystem. Gain fortune by exploration and battle in the universe and earn profit by staking the tokens ($WARS and $GAM) and NFTs in the metaverse and play in the upcoming strategic RPG game.