Mid this week, the chief technology officer at popular decentralized exchange (DEX) SushiSwap Joseph Delong stepped down from his role. He blamed the internal chaos at the project as a key reason for his resignation. And now, he has written a short reflection on his own failures while at the helm of the DEX and pledged to do better with his next project.

Delong claimed at the time that “the chaos that is occurring now is unlikely to result in a resolution that will leave the DAO as much more of a shadow than it once was without a radical structural transformation.”

In the interest of the Sushi Community I am resigning as CTO effective immediately. I very much enjoyed the things that we built together and will look back positively on this moment. pic.twitter.com/7pZsQuPgup

Now, he has shed more light on what went wrong for him at one of the industry’s more popular DEXes.Titled “My Failures in Leadership at Sushi,” the blog post talks about the three main issues Delong faced as the tech lead of a DEX that has seen so much success, but also faced a fair share of challenges.

Infighting and problematic contributors at SushiSwap

One of the more public issues at the DEX was infighting between the developers. Three core developers, Keno, BoringCrypto and LevX were already fighting when Delong joined the project, he reveals in his post. To quell the chaos, he took on extra code review responsibilities, but this wasn’t enough.

“If I had to do it over again I would have let LevX go earlier and insulated Keno and BoringCrypto,” the developer now notes.

The infighting was exemplified by the departure of Maki, the CEO who led the project through its early days and made it the success it is today. Maki departed in mid-September and this took away Delong’s ability to kick out problematic developers, he said.

His biggest failure has been communication, or the lack thereof. “Communication was such a critical component to my failure,” he notes in his reflection.

For one, he failed to communicate the problems at the project to the community, which he now says he regrets.

Secondarily, I did not communicate with the community enough so that, when faced with a problem that I would need to speak to them on I was no longer comfortable engaging. So, in hindsight, I would have spoken more regularly with the community to increase our rapport.

Then there was his use of Twitter. Delong had become a polarizing figure in the SushiSwap community for speaking his mind on the social media platform, much like Elon Musk with Tesla. In retrospect, Delong regrets turning to Twitter as a first resort, and should have instead “diverted through official channels.”

In the end ultimately I failed to deliver because of my compounding failures and will incorporate this knowledge into my next project. I think the imperfect birth of Sushi has led to additional problems and in my next project, I will have the capability to structure an organization to empower the contributors.

The SushiSwap token (SUSHI) is trading at $5.5, having gained 2 percent in the past day. 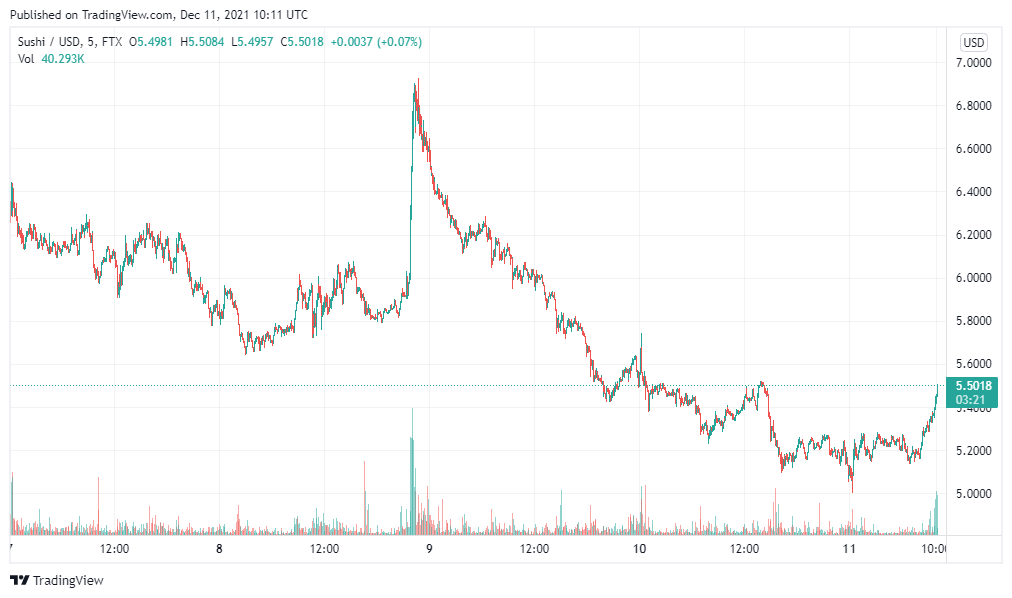