WeFund is a community crowdfunding incubator for blockchain and real-world projects hosted on various blockchains including Terra, Solana, Ethereum, and more.

WeFund’s native token (WFD) and platform are built on the Terra blockchain, a stable-coin-based ecosystem with high-quality protocols, low gas fees, and a strong community. What WeFund offers to the community is they provide a milestone budget release to protect investors from losing money and also all the money deposited in Anchor to make it all secure, it means the WeFund team can’t touch the money.

WeFund is a decentralized crowdfunding platform for crypto-startup projects and beyond, with a real-world use case. WeFund’s mission is to:

WeFund’s initial development stage would be in the Terra ecosystem and will continue to deploy additional ecosystems such as Solana, Etherium, Cardano, and others in the near future to achieve this ambition.

WeFund makes itself different thanks to their unique features:

WeFund stands out in the business because to its one-of-a-kind features.:

How the WeFund Platform works

WeFund, the Terra Ecosystem’s cross-chain crowdfunding tool built for the community, is the key to projects realizing their goals.

By December 2021, the web app platform will be available. There are now three projects on WeFund that are commencing their crowdfunding campaigns:

Utilize various ad placement options to boost a project’s visibility. Backers can contribute more funds to support their favorite project proposer, and projects that use the WFD token to raise funds will receive prioritized ad placement on the site.

If a proposal is rejected after voting or validating, WeFund will provide consulting services to help refine the concept. In exchange, the project proposer can provide WeFund token allocation or profit-sharing, with the exception of charity projects, for which WeFund would provide free consulting.

Each user will have 1 opportunity to make their impactful decision in each project thanks to the wallet voting mechanism.

They created a system to maximize the backing opportunity proportional to the number of potential backers, always guaranteeing the possibility for backers to participate.There are currently more than 100 angel investors on board.

With the mission to host high-quality projects and help them to grow strongly, WeFund shares a huge portion of profit to company investment, anchor investment and crypto expertises. Investors will also earn the perk of being early come with 3% profit.

The WeFund platform’s main token is $WFD. This token may be used to pay for advertisements to raise project awareness, has a 0% transaction fee guarantee, and can be used to increase value through deflationary acts. 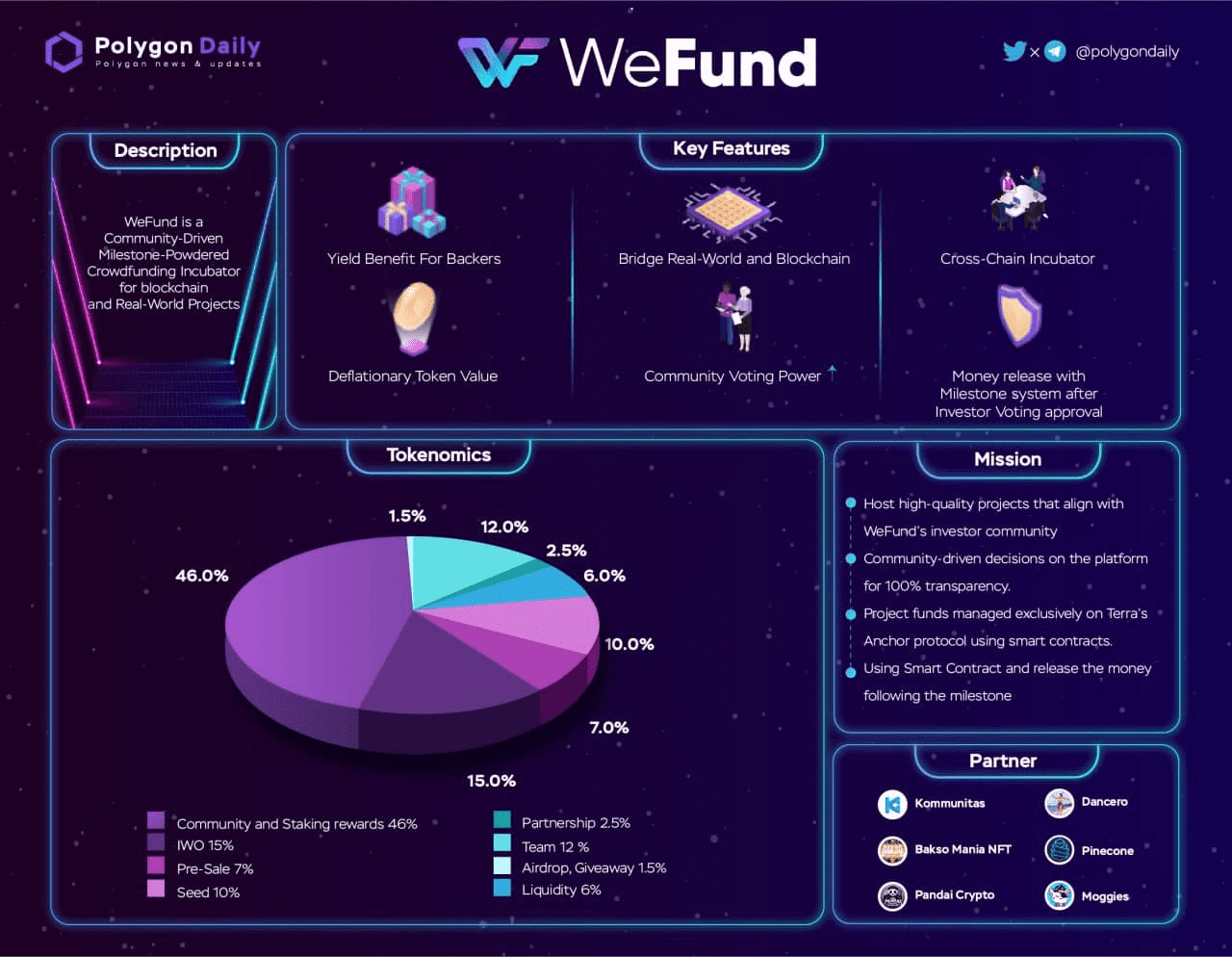 The quantity of tokens to be placed on the market will be determined by the platform’s capability. This sum will be equal to 25% of the token they need to buy-burn in the exchange (the fee produced by the platforms).