Bitcoin has been rangebound in the past week and at press time, it’s trading just below $30,000 after losing less than a percentage point in the past day. The UST and LUNA collapse has been pointed to as the genesis of the crypto carnage, but according to one of the biggest investment banks, this was just a small episode in a longer turn of form that is much bigger than any one project.

BTC is changing hands at $29,940 at press time on FTX and Coinbase and slightly higher on Bifinex. It has lost 0.7 percent in the past day for a $572 billion market cap. It’s now 56.3 percent below its all-time high which it recorded in November last year just shy of $69,000. After a slump over the weekend, BTC trading volume is up by 15 percent to hit $32.6 billion. 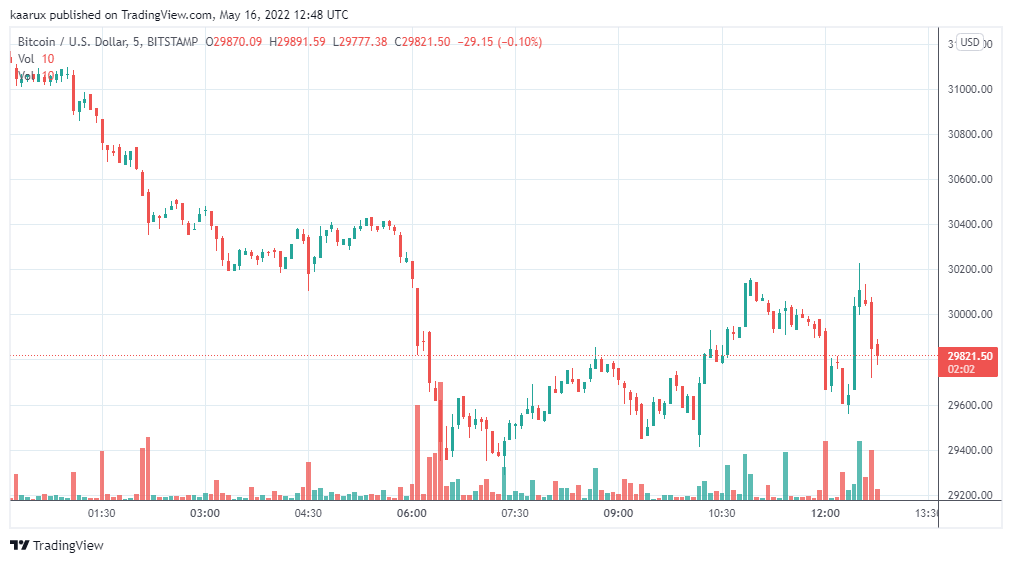 (BTC price performance in the past 24 hours).

Bitcoin isn’t the only crypto that’s struggling. Ethereum can barely stay above $2,000 as most other top 100 cryptos lose between 1 and 5 percent. There are a few that have gained such as Kusama, Monero, Cardano and Cosmos, but even with these, the gains have been modest.

And while UST and LUNA are the obvious candidates for being responsible for the lackluster market performance, Morgan Stanley believes that the downturn in form stretches much further back. The New York bank says that the big-pocketed investors have been more responsible for the dip than anyone else.

Morgan Stanley: Blame the big money for the Bitcoin carnage

Crypto has always been considered a retail traders’ haven, with Wall Street staying out of the industry for the longest time due to wild volatility and lack of definitive regulations. However, this has changed in recent years.

Retail investors are no longer the dominant crypto trader. The largest proportion of daily crypto trading volumes is from crypto institutions, much of which comes from them trading with each other. Retail traders were dominant around four years ago, when bitcoin traded below $10k.

“We think the increased involvement of institutions, which are sensitive to the availability of capital and therefore interest rates, has contributed in part to the high correlation between bitcoin and equities,” the bank added.

It’s more evident on Coinbase perhaps than anywhere else just how much traditional finance (TradFi) has taken over crypto. The exchange is considered a retail haven and is where most Americans make their first trade as they try out crypto due to its easy-to-use interface. Coinbase is also a publicly-traded firm which gives investors even more confidence.

However, even on Coinbase, retail traders now only make up less than 35 percent of all traders, down from about 80 percent four years ago. 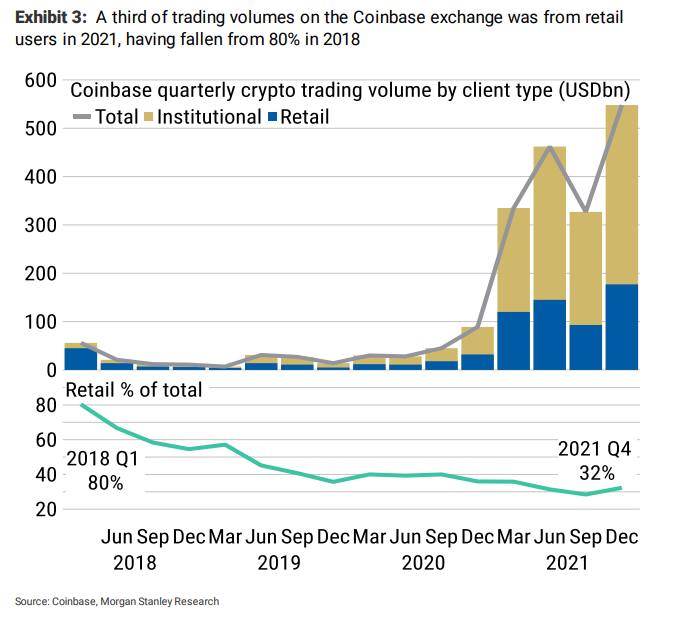 And it’s not just on Coinbase. Chainalysis, a blockchain analytics company, estimates that institutional investors now make up at least 44 percent of total crypto traders as of the end of Q2 last year. About a year before that, they only made up 8 percent, showing just how quickly crypto has caught on on Wall Street, with no major financial entity wanting to be left behind.

Even BlackRock, the largest asset manager with $9 trillion in assets under management and which had stayed away for some time, invested in Circle, the maker of USDC amid other crypto-related investments. There are also rumors that it might be behind the UST crash, but as CNF reported, it has denied the rumors.

Read More: Up in flames: LUNA slips out of top 200 after losing 99.9% value as big money distances itself

VandaTrack, a trading data provider, pointed out the correlation between crypto and the traditional finance, saying that “as more institutions await the first results of the White House executive order on crypto regulation (early June), current price behaviour will continue to be driven by TradFi assets (i.e. Tech). And as moves in rates are driving risky assets behaviour, BTC and ETH will remain strongly correlated, high-beta plays on TradFi in the near-term.”

With the entrance and domination by these big-money investors, crypto will slip further and further from its previous status as a hedge against the normal market shocks as it becomes more intertwined with the traditional equities. After all, these same investors control the equities market.

Crypto prices rose in 2020 and 2021 due to central banks increasing fiat money supply. Now the Fed is tightening, crypto and equity markets are correcting lower.

The bank added, “Speculative risky assets, like cryptocurrencies, have repriced lower as their higher prices (relative to 2019) had been justified by ample USD creation. The correlation between bitcoin and equity indices has remained high and will continue to do so unless bitcoin becomes widely used as a medium of payment – which looks unlikely to happen soon.”