Avalanche has been an up-and-coming chain since last year. Although this year wasn’t particularly favorable for a hike on the charts, Avalanche still managed to retain its position in the DeFi market and is also seemingly strengthening itself in the NFT market.

Over the past month, Avalanche gained on both the DeFi front, as well as the investment front.

Recently, after the launch of Avalanche’s new NFT marketplace JoePegs, the trading volumes of these non-fungible tokens began rising. In fact, throughout the month of July, NFT sales maintained a high.

Starting 1 July, the sales first rose to $117k and averaged at $80k over the next 20 days. In doing so, it marked spikes every now and then on the charts.

At its highest, over $179k worth of NFTs were sold through Avalanche NFT marketplaces. As of this month, the average volume has been sitting at $30k.

JoePegs’ arrival has been met with acclaim from investors and artists alike. So much so that within a month, it became the biggest NFT marketplace on the blockchain, with higher trades than any other marketplace.

This, in return, has had a positive impact on AVAX. Following the same, AVAX joined an exclusive club of a few cryptocurrencies that have risen by more than 100%.

However, by the looks of it, AVAX only has a few more days worth of rally left in the tank as the cryptocurrency seemed overbought.

The hype surrounding it created FOMO for the altcoin, one resulting in a possible trend reversal over the next couple of days. The same was underlined by the Relative Strength Index (RSI) too.

This could affect the bullishness being seen in investors. This resulted in over 19 million transactions last month and over 8.5 million in the previous week alone.

If the current conditions persist, by the end of the month, Avalanche could record about 34 million transactions. Alas, the chances may be pretty bleak, especially since the market will need to cool down. 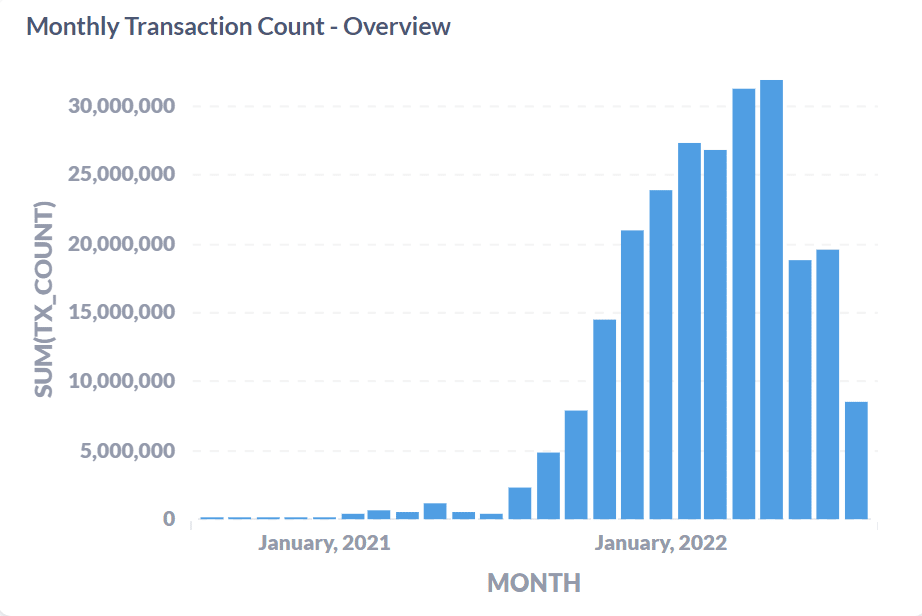