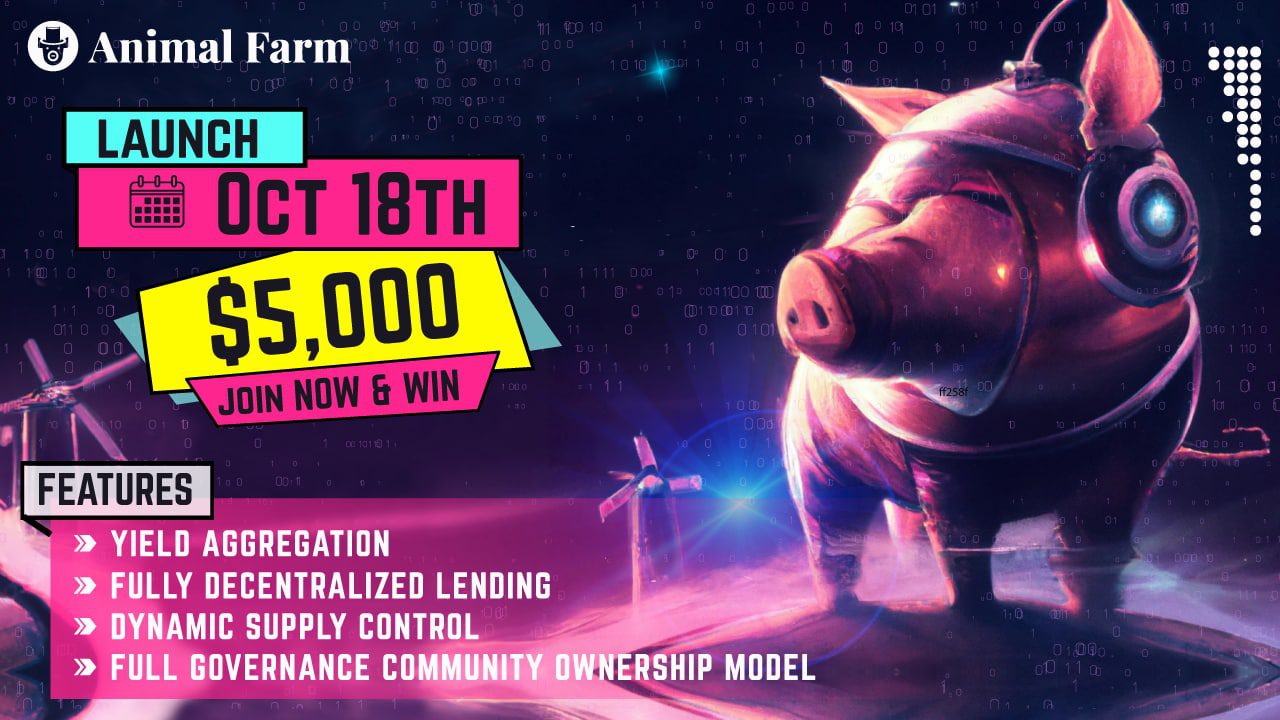 As a result of DeFi protocols, access to finance has been democratized, allowing anyone with an Internet connection to gain access to opportunities and services. However, they only gained popularity after the ‘DeFi summer of 2020’ and the yield farming craze that followed.

The concept of yield farming has changed the way people view savings by becoming the standard means of generating passive income in the cryptosphere. Consequently, numerous DeFi protocols have developed their architecture and functionalities around yield farming. However, yield farming has remained virtually unchanged over the years despite its value.

Animal Farm is a DeFi protocol that is modelled after George Orwell’s novel of the same name that criticizes centralized power. Unlike its competitors, it is the first and only decentralized ownership lending and yield aggregation protocol in the DeFi industry.

In contrast to other DeFi platforms, Animal Farm utilizes a dynamic supply control algorithm. By employing this innovative algorithm, the supply of the DOGS ($AFD) token, which will launch on October 18th, and the PIGS token, is determined in a trustless, decentralized manner.

As a result of the supply control algorithm and tokenomics of DOGS ($AFD) and PIGS ($AFP), the supply is designed to remain stable and even become deflationary during times of low demand, thereby allowing for optimal pricing performance in all market conditions.

The Animal Farm team will be conducting a giveaway contest in celebration of the full launch of the protocol on October 18th. After completing a series of tasks, one user will be awarded exactly $5,000 worth of BUSD. In order to avoid adding to the circulating supply of tokens, Animal Farm does not pay for promotion or marketing with native tokens. Therefore, the reward will be in BUSD.

Launching on October 18th, DOGS ($AFD) has a unique vesting model which does not lock users’ tokens. By instead using a variable tax model, it has created an incentive structure that rewards those who secure profit in the form of BUSD and BNB dividends by staking DOGS ($AFD) instead of selling it on the market.

Stakers in Animal Farm’s ‘DogPound’ have the tax associated with transacting their DOGS ($AFD) reduced at a rate of 1% daily. This model perfectly aligns incentives for optimal performance. It rewards users for removing AFD tokens from circulation while allowing them to earn as the wealthy do by accumulating assets; this allows them to earn a dividend paid out in BNB.

70% of taxes placed on DOGS ($AFD) token transactions are swapped for BNB and paid out to the ‘DogPound’ loyalty staking contract, allowing DOGS ($AFD) stakers to reduce their DOGS ($AFD) transaction tax while earning a high yield BNB dividend.

30% of taxes on transacted DOGS ($AFD) tokens are swapped for BUSD and paid out to the ‘PigPen’ as a high-yield BUSD dividend. The platform owners receive 75% of the fees generated from deposits and withdrawals in BUSD, which are then distributed as a high-yield dividend to $AFP stakers in the PigPen. 25% of fees generated on the platform from deposits and withdrawal fees are utilized to buy DOGS ($AFD) and add AFD/BUSD liquidity, generating a consistent flow of DOGS ($AFD) buy pressure and locked decentralized liquidity.

Whenever $AFP or $AFD tokens are sold, 3% of the transaction is burned, which removes them from circulation forever, making them deflationary.

Decentralized lending is achieved by lending collateralised TVL (Total Value Locked) to Pancakeswap, the largest decentralized exchange on Binance Smart Chain (BSC). Thus, Animal Farm offers low-risk yield aggregation compounded on top of yield natively generated by the protocol. Yield generated through lending to Pancakeswap is converted to BUSD and paid out to ‘PigPen’ stakers. The users gain all the benefits of earning yield on Pancakeswap while earning additional cash flow on Animal Farm with improved incentive structures.

Not only are stakers of the $AFP token earning platform fees and taxes as owners of the platform, but they also have a vote on future roadmap proposals.

With all of the mechanics detailed above, rewarding users for removing $AFP & $AFD tokens from circulation and paying out a dividend for doing so in the non-native token (BUSD & BNB), and dynamic control of the supply based on underlying demand, Animal Farm and it’s native tokens are designed to be the highest performing yield generating assets ever created.

Animal Farm is ready to become one of the leaders in the DeFi world. There is an extensive roadmap, which includes already developed products, generous incentives, an appealing referral program, an elegant user interface, a distinctive architecture, and an innovative yield-generating system that performs at all market levels.

To learn more about Animal Farm, how to purchase $AFP now, and prepare for the full launch on October 18th, visit the official website and socials (Twitter, Discord, Youtube).

This is a sponsored post. Learn how to reach our audience here. Read disclaimer below.

Bitcoin.com is the premier source for everything crypto-related.
Contact the Media team on [email protected] to talk about press releases, sponsored posts, podcasts and other options.