AMC Theather, the largest movie theater company in the world, announced that they will be accepting Shiba Inu (SHIB) as a payment method through Bitpay, becoming their first client to do so.

The company has been working on accepting diverse cryptocurrencies as payment methods for a while and now offers to do so through PayPal, which allows payments in Bitcoin (BTC), Ethereum (ETH), Lietcoin (LTC), and Bitcoin Cash (BCH).

However, AMC is also interested in accepting the meme cryptocurrencies Dogecoin (DOGE) and Shiba Inu (SHIB) because of the remarkable popularity both showed on Twitter during polls made by the theater chain CEO Adam Aron.

When CEO Adam Aron conducted the last Twitter poll, Shiba Inu got 124,623 votes in favor, which takes us to this new announcement in which Shiba Inu shares its spotlight with Bitpay. In about 3 months PayPal will cease to be the only payment method that supports cryptocurrencies on the AMC website. 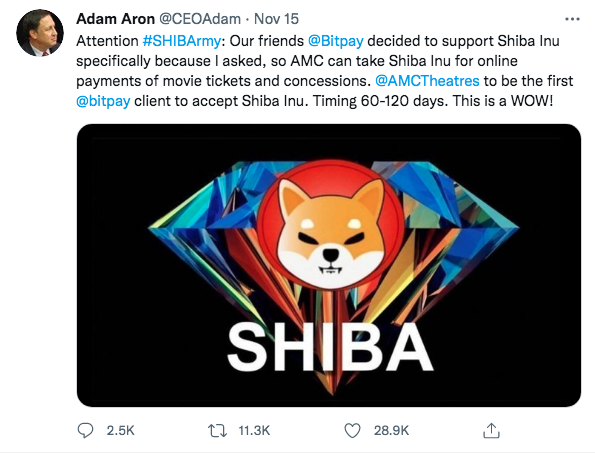 Bitpay, as a payment method for the theater chain, does not only allow more cryptos as options -a great marketing strategy for AMC-, but it also emphasizes Paypal limitations with only four crypto coins and services that lack many great features offered by actual crypto wallets.

At the beginning of the year, Paypal launched a new service enabling its customers to “buy, hold and sell cryptocurrency directly from their PayPal account”. Ever since, they reported a 22% yearly increase of active accounts in Q3, now having 361 million users.

For Paypal, this seems to have worked as a rewarding marketing strategy, since the main intention was to attract clients that might stay for other features.

However, Paypal does not provide its users with a crypto wallet and there are no private keys. The crypto bought in PayPal can mostly be useful inside its retail network.

Essentially, what the platform does is hold the user’s cryptocurrencies on its behalf, but does not provide them with a real one. Using Paypal also implies no anonymity and limited options to use the funds, which, for many, defeats the purpose of crypto.

Back to when the company made the announcement, many Reddit users described the feature as something that gives “fake numbers as crypto”, stating that this is not an intent of adoption of crypto, but the monopolization of it, and if the mainstream adoption of crypto were to follow this path, it would not be different as “the banks holding all the money”.

One user suggested that PayPal “will simply let people think they are using Bitcoin when they’re really not, and then use the blockchain as a settlement layer. And then we’re right back in a central bank dystopia.”

PayPal expanded this feature towards Venmo. A spokesperson shared with Bloomberg  that offering crypto is “part of Venmo’s continued evolution from a peer-to-peer payments app to a more holistic offering that our customers rely on in their everyday financial lives.”

PayPal’s crypto announcements did have some highlights, as its already wide platforms could increase the public’s acceptance of major coins. Some even thought that it could also increase their value, and saw the possibility for the company to allow withdrawals of coins eventually.

However, BitPay crypto-related features are not only better, but truer to crypto ideals. Users claim Bitcoin transfers from other wallets to BitPay are easy, it allows payments from anywhere, Bitcoin can be directly transferred into a debit card or exchanged for other currencies. Creating a Bitcoin wallet in the platform allows the user to spend the coin anywhere by offering to turn it into dollars.

Non-custodial wallets, such as BitPay’s, are described as decentralized because the customer gets to own its private keys and has total control over their funds, opposingly to PayPal’s service.

The rating for user satisfaction between the two platforms reads BitPay (100%) vs. PayPal (97%) according to FinancesOnline. Now being under the eye of AMC’s huge customer base and SHIB’s enthusiasts, will BitPay be overshadowing PayPal as a payment method?