Of late, XRP has received a lot of media attention, in part due to its legal disputes with the SEC and partly owing to its appreciating price trend. In fact, data from LunarCrush indicates that XRP’s social engagements and mentions have also seen a favorable response lately.

XRP is ranked above 3,800 cryptocurrencies on LunarCrush’s Alternative Ratings, according to their most recent tweet. There is a sizeable community for XRP, and the most recent ratings reflects an increase in activity.

XRP’s press time price seemed to be supported by the widespread optimism surrounding it. The potential resolution of the legal dispute between the Securities and Exchange Commission (SEC) and Ripple is one possible explanation for this feeling. Through a process known as summary judgment, both Ripple and the SEC are hoping to finally get a judgment in their protracted legal struggle. Recent documents reveal that neither side wishes to proceed with a full trial.

If Ripple ends up settling the lawsuit, there might be a sudden drop in XRP supply, which would likely cause the price to spike because demand is stable but supply is falling. Popular crypto-analyst Ben Armstrong recently shared that one of the reasons for the pump is that the SEC essentially gave up attempting to establish XRP as a security. He thinks that even if Ripple loses the litigation, the most severe consequence would be a fine that the company could easily pay.

How bullish is XRP right now?

A look at XRP’s price movement within the 6-hour and daily timeframes gives us an insight into the price behavior over the past few weeks and months.

Until new supports are formed, utilizing the 6-hour timeframe, the supports can be placed at $0.38 and $0.46.

The Relative Strength Index (RSI) and Directional Movement Index (DMI) were both showing a strong bullish trend too. The RSI on the daily timeframe found XRP in the overbought zone, with the same over the 70-mark. Within the 6-hour timeframe, however, RSI has gone below the 70-mark.

Both RSI timeframes hinted at a possible correction in price. For the DMI, the Signal line and the plus DI line were well over 20, confirming a strong bullish trend. 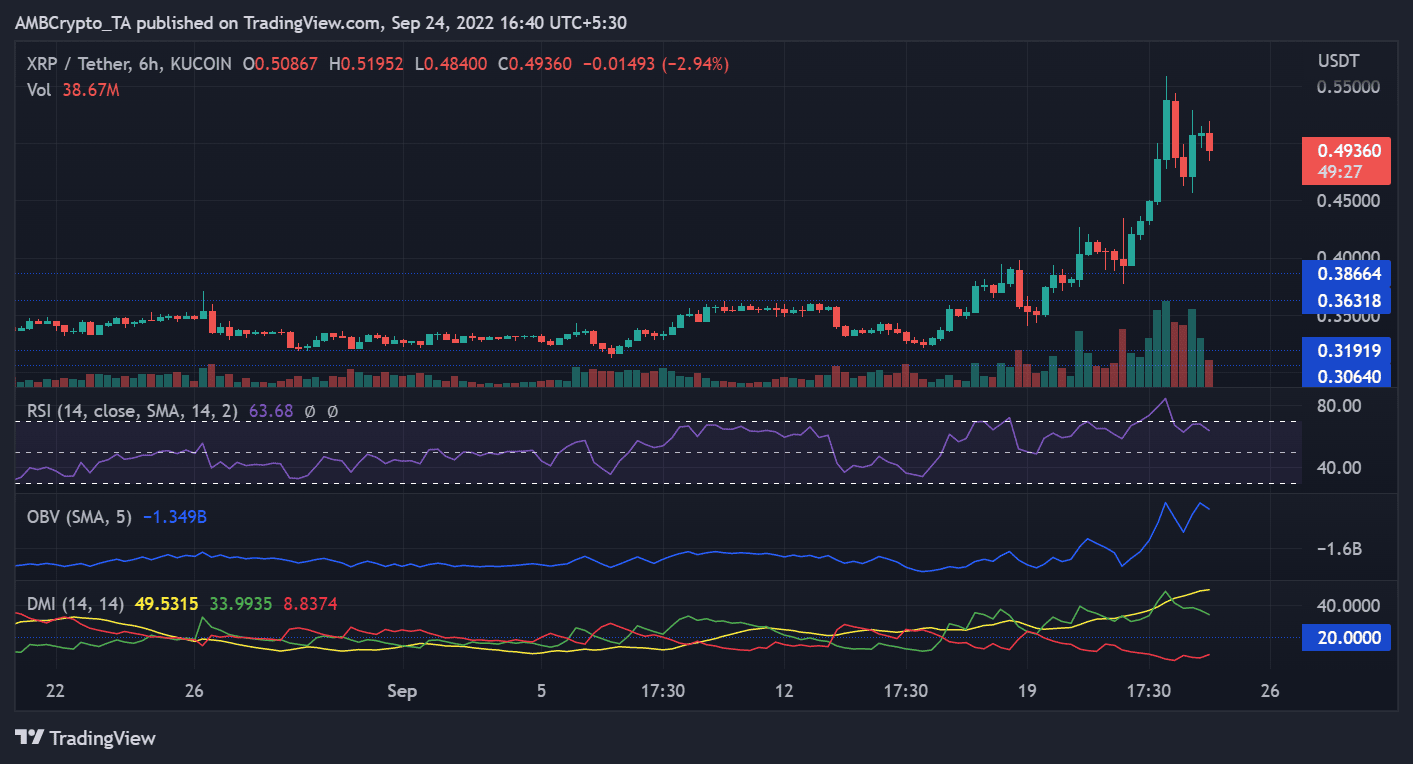 A ruling on Ripple Lab’s move for summary judgment, according to the company’s CEO Brad Garlinghouse, may take anywhere from two to nine months once it is “completely presented in front of the judge” in November. According to Garlinghouse, Ripple is willing to spend more than $100 million to defend itself against the SEC, which is something he views as crucial not only for Ripple but for the entire cryptocurrency sector.