Polygon’s [MATIC] 6.55% uptick in the last 24 hours may not be because of the all-inclusive crypto market redemption. While this claim does not exclude the contribution, other factors seemed to ensure a guaranteed increase.

Based on Santiment data, MATIC investors could be preparing to grab more of the bullish traits. This is because the Market Value to Realized Value (MVRV) ratio seemed poised to leave behind its massively underwhelming September performance. According to the analytic platform, MATIC’s MVRV was 1.924%.

This could be a sign that October could offer better in terms of profit for its investors. It was noteworthy that the increase seemed to have taken the position since 1 October as it decided to exit the -4.48% region.

Separating the alphas from the pack

Additionally, the thoughts of a bullish October were not left to the MVRV alone. In a recent tweet, Santiment reported that MATIC was one of the top cryptocurrencies with increasing unique network addresses.

According to the revelation, the carbon-neutral project was ranked fifth, behind Bitcoin [BTC], Ethereum [ETH], Litecoin [LTC], and Tether [USDT].

📊 The assets getting the most address activity (unique interacting network addresses per day) are many you may expect. But #Litecoin at #3, #Polygon at #5, and #BitcoinCash at #10 may surprise many, as #cryptocurrencies outside of the top 20 market cap. https://t.co/gU3vad5CQ5 pic.twitter.com/NV1MKlqOti

This implies that investors across the crypto community seem to be paying more attention to MATIC. On another end, Polygon seemed to be active concerning developments on its chain.

Recently, the Ethereum-based platform confirmed that SynFutures had deployed the second version of its mainnet on Polygon. This made the network the first to achieve such a feat. Hence, MATIC investors may now have more opportunities to access the derivative market via the SynFutures protocol.

After months of development and testing,#Polygon is thrilled that @SynFuturesDefi will begin the next phase of their V2 rollout.

As per the development activity, the mainnet deployment did not seem to do much across the board. However, the volume increase in the last 24 hours may have confirmed the rising MATIC interest.

An increase in the current volume could take the MATIC price further up from the present state.

Interestingly, MATIC investors may have chosen yesterday (3 October) as the game-changer day. According to the four-hour chart, it was on the said date that the MATIC accumulation and distribution began a significantly increasing journey.

Before then, the accumulation distribution was down to 10.24 billion. At press time, it had increased to 10.28 billion.

Considering the volatility, it was likely that MATIC bullish momentum could increase further. This is because the Bollinger Bands (BB) signaled to leave the low volatility region on the aforementioned date.

The BB indicated extreme volatility at the time of this writing. As such, MATIC could build on this to go parabolic. 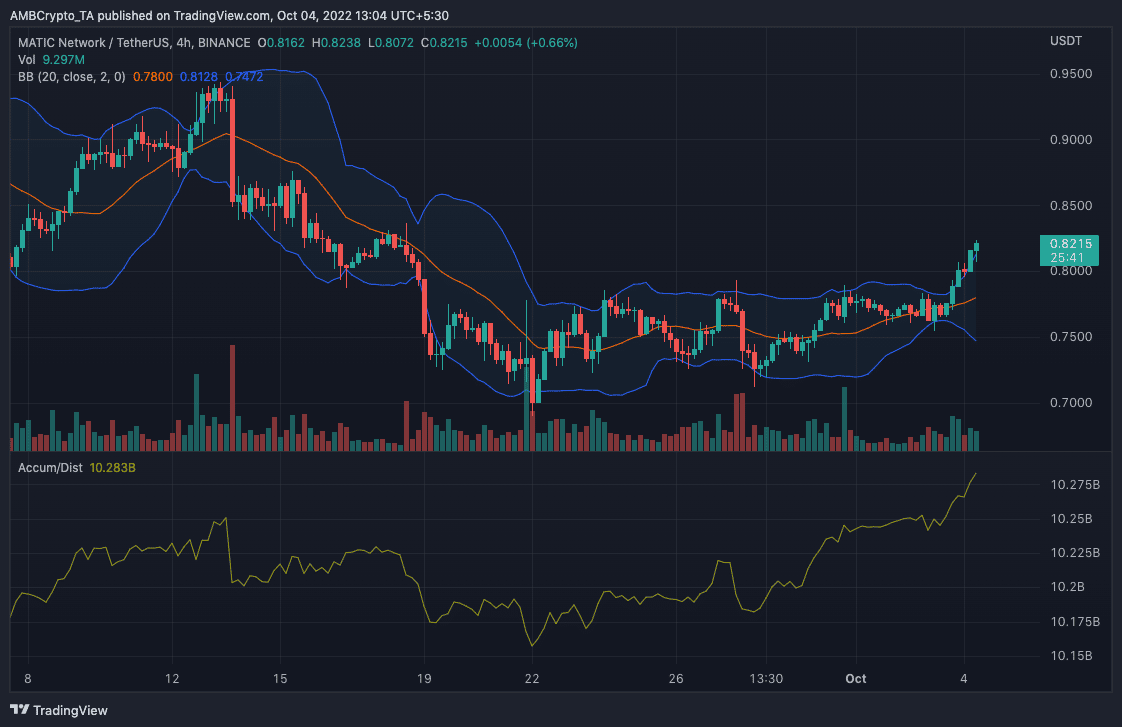